Are You Taking Your Leadership Call Seriously Enough? 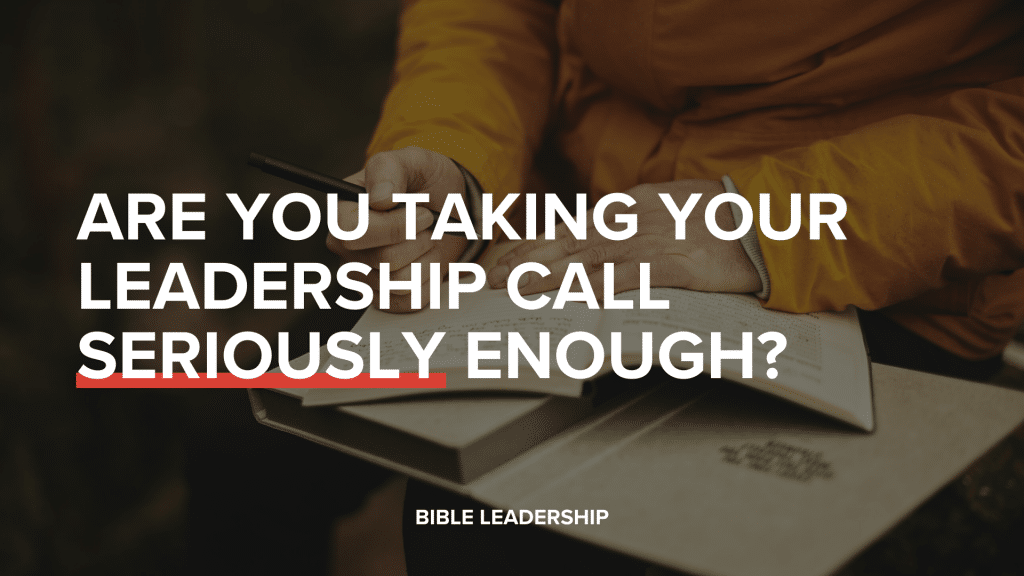 The angel appeared to Samson’s parents with this prophecy:

“You will become pregnant and give birth to a son, and his hair must never be cut. For he will be dedicated to God as a Nazirite from birth. He will begin to rescue Israel from the Philistines.” (Judges 13:5, NLT)

If your birth had been foretold to your parents by an angel, I think we could reasonably expect some kind of extraordinary life to follow.

But it didn’t turn out so well for Samson. Once grown, he was led around by his own lusts, rage, and pursuits for most of his life. The prophecy was fulfilled . . . barely.

Take a listen to the last moments of Samson’s life:

“Half drunk by now, the people demanded, “Bring out Samson so he can amuse us!” So he was brought from the prison to amuse them, and they had him stand between the pillars supporting the roof.” (Judges 16:25, NLT)

Is there anything more tragic?  Samson, the living legend, a titan of incredible power – was reduced to a blind circus act before the enemies he was born to destroy.

Like many of us, Samson seemed to like the IDEA of a calling more than the WORK of one!

The cost of the fullness of any true calling is character – not who we pretend to be for a watching world, but who we actually ARE when no one is looking – this is what determines our destiny and legacy.

For Samson, it wasn’t his copious charisma that proved to be his downfall.

It was his low, lame, neglected character.

Here is How to Completely Short-Circuit the Call on your Life:

There is no evidence in Judges that Samson invested even five minutes into HOW he was going to embrace the God-given mission of his life.

Leaders who have a calling but no plan are just killing time.

Judges 16:17 reveals, not just a super-hero who lost his powers, but a worn-down dupe who gave away his strength after years of self-will and surrender to promiscuity and fornication.

Purity means we’re turning away from, not just the larger, visible expressions of evil, but the little ones as well.

The enemy’s plan is to wear down a leaders defenses over time, getting them increasingly comfortable with a little evil, that will snowball into GREAT evil later.

Samson had no visible spiritual pursuit of the God who had called him.

If he was attempting to fulfill his destiny at all, he sure didn’t seem to think staying synced with God was important.

Leaders who fulfill God’s purpose for their lives understand that staying synched with their heavenly Commander-in-Chief is the ONLY way they will know what to do and NOT do.

Without daily time with God, THE CALLED cut off the branch they are sitting on.

When we fail to invest time into our relationship with God, we are at BEST underachieving, and at worst tragically MISSING what we were put on earth for.

4. Stay Loose and Vague about Accountability in your Life!

Foolish leaders believe that if there was a problem, they would see it. This is a dramatic failure to consider our own fallenness and propensity to deceive ourselves (see Jeremiah 17:9).

Accountability is about the humility to cleanse ourselves before another (and even with their help). It’s difficult and humbling but it draws the power of God to our lives. And the power of God is worth it.

The enemy deals in secrets.

Satan wants you quiet and fearful about revealing what you struggle with. Give that old snake a nervous break-down and expose it!

In his last moments, a prisoner of his enemies, God gives Samson, now blind, the spiritual sight to look to Him for help executing what has been the judge’s prime directive – crush the Philistines!

We are left to wonder HOW MUCH MORE could have been accomplished had he focused more on his calling than on carnality.

Leader – Let’s not presume on God’s mercy for a later stage of life.

NOW is the time to focus more on building the character necessary to complete your calling.

HOW MUCH MORE might God do through a people who will

My heart and eyes wander from a single-minded devotion to not only your mission but your ways.  Train my heart to gaze on Jesus as my model of deliberate determination to stay on-mission.  May I love CHARACTER more than applause or carnal pursuits. And may I present you with a leadership-life that was imperfect but persevering in its focus.

If it was helpful, it’s super encouraging to me when you share this resource.